Sally has been in the ministry for over fifty years. Much of her early training was in children's ministry. She carried such passion and burden for this ministry that she thought she had found her life's calling. However all that changed after the death of her late husband. The Lord asked her to lay down the children's ministry.

After much healing and being freshly empowered by the Holy Spirit, the Lord thrust her out into a new ministry in the Word and in the Spirit. Sally preaches prophetically bringing the "now" word of the Lord into situations where she is called to minister. As a result many lives have been impacted by God's love, healed both emotionally and physically, and set free to enjoy intimacy with God their Father. She has ministered widely in her own nation of New Zealand and in over twenty five other nations.

Sally also carries a burden to see the body of Christ come together in prayer. She believes that united corporate prayer paves the way for God to breakthrough in a city. To this end she led a monthly city wide prayer meeting in Christchurch for ten years.

In August 2011, Sally married Wayne Curham. This wonderfully fulfilled God's promise to her that one day she would remarry. They now minister powerfully together and are available to go wherever God would send them.

She has three married daughters who along with their husbands love and serve the Lord, along with nine precious grandchildren. 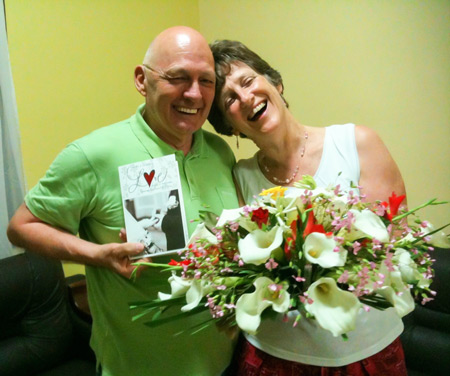 A lifetime resident of New Zealand, Wayne is a committed Christian who loves to be in the presence of God and see His power manifested here on earth.

He has travelled to over thirty nations ministering to the wider church family, many of them with Open Doors International, when he visited many restricted nations in his capacity as the New Zealand director.

He has a passion for seeing the Church blessed by imparting something of the Father's heart, and to activate faith to see lives being touched by the love of God and empowered by the Holy Spirit to serve Him. His ministry gifts are teaching, prophecy, healing and deliverance.

Wayne enjoys travelling and is happiest when on short-term mission trips. Wayne and Mary, his late wife of forty three years, went on many God adventures together and their story is now published in "Swing Wide The Gates".

Wayne's life was wonderfully changed again when he married Sally Cowie and to quote his eldest daughter, "My dad is a lucky man".

Wayne has four adult children and seven grandchildren. He loves a wide range of music, the outdoors, and gets excited when he can go fishing.